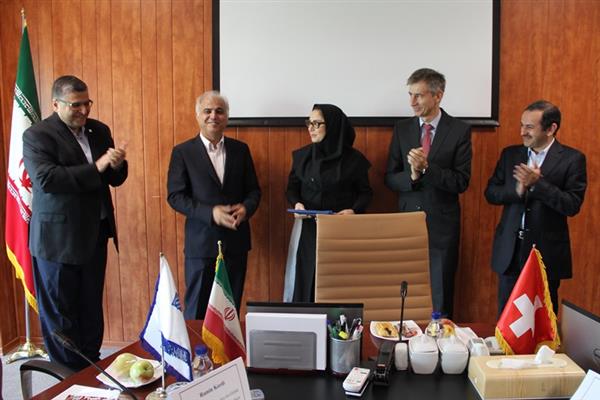 On Wednesday, August 8, 2018 His Excellency Mr. Markus Leitner, the Swiss Ambassador to Tehran attended a meeting which was held for celebrating the Swiss National Day and the inauguration of Dr. Naghmeh Meraji as the secretary of the Leading House for Iran-Switzerland Academic Partnerships at TUMS headquarters.

In this meeting, Dr. Ramin Kordi, Vice-chancellor for Global Strategies and International Affairs, Dr. Sahraeian, the Vice-chancellor for Research and Technology, Dr. Sadeghniiat, Managing Director of Imam Khomeini Hospital Complex, Dr. Nikfar, the Director of TUMS Research Affairs, Dr. Nekoofar, the Director of International Relations, Accreditation and Ranking, and Vice-deans for International Affairs of TUMS Schools and other TUMS and Ministry of Health and Medical Education (MoHME) officials attended The meeting started with the recitation of holy Quran and Iranian and Swiss national anthems and then Dr. Kordi, welcomed His Excellency Mr. Leitner and congratulated him and his companion the Swiss National Day.

His Excellency Mr. Leitner presented the strategies of research and innovation in Switzerland and explained: "Swiss universities, research centers, academics and researchers act independently and follow a bottom-up approach in research. Swiss researchers take personal initiative in submission of research proposals. Research and innovation funding grants are awarded on the basis of competitive principles and qualitive criteria". He also indicated the recent efforts to enhance mutual collaboration between the two countries and said: "during the recent visit of the Swiss delegation to Iran in May 2018, a joint statement was issued between SERI (State Secretariat for Education, Research and Innovation) and MoHME. It has also provided the opportunity for the Swiss delegation to visit TUMS and other major universities in Iran and participate in the Swiss-Iranian joint research workshop in Isfahan". He added: "inauguration of the Leading House for Iran-Switzerland Academic Partnerships at TUMS is an important step towards a fruitful collaboration between the two countries". Mr. Leitner also mentioned the declaration of intent between Federal Office of Public Health (FOPH) and MoHME following the President Rohani's visit to Switzerland on July 2018.

At the end, he provided some information about funding instruments and grants and declared that the Swiss Government Excellence Scholarships for Foreign Scholars and Artists is now open

Dr. Meraji continued the meeting and indicated that the history of bilateral relations between Iran and Switzerland goes back to the 17thcentury and it has become deeper and stronger in the recent years. She also mentioned the recent trip of President Rohani to Switzerland, in which both countries reaffirmed their support for the road map agreed in 2016 and emphasized on the expansion and development of educational, research and technological interactions in the fields of mutual interest.

She stated: "the establishment of the Leading House for Iran-Switzerland Academic Partnerships is in line with the foreign policies of the two countries and both Leading Houses' activities can and should have a great impact on the expansion of academic and research collaboration between the two countries".

She continued her speech by mentioning some of the activities of the Leading House so far, such as interaction and multiple correspondences with Mr. Waseem Hussain, Head of Leading House South Asia and Iran in Switzerland, preparing an MoU to be signed between the two Leading Houses, designing a logo and dedicating an Email address to the Leading House, conducting research on potentials for enhancement of collaborations with Swiss universities, preparing a database of all the Swiss universities and corresponding with them in order to announce the establishment of the Leading House and declare readiness for bilateral academic collaboration, advertising the Swiss research grants to Iranian medical universities and researchers and providing consultation for applying the Seed money grant.

At the end, the attendees started the discussion panel and explained about their current collaborations with the Swiss Universities in details and suggested possible future collaborations to be taken into considerations.

To share this page with others, use links below: